Antiperspirant or Deodorant, Is it? 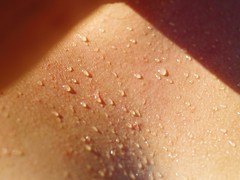 One helps you smell better and one helps stop sweating, or at least slows it down drastically. Stick-It.us Body Sticks are used for deodorizing but they won't stop you from sweating. One helps us live in close proximity in peace and harmony and one stops soppy pits.

A deodorant works by fighting the bacteria that can cause offensive odors and by creating a scent barrier to block odor or at least mask it and ingredients that help defend against the bacteria that live there. This is where all natural deodorants have a disadvantage. The natural or organic derived compounds are not always as effective as a genetically engineered compounds or the synthesized ones. Obvious, I know. but a great many of us never stop to think about the little details. We do, 'cause we make the stuff.

Some natural deodorant companies use acidic or salts to help kill the bacteria. Problem with that is some people have really sensitive pits (and parts). So you gotta' be careful where you put it. Think about salt and acid for a minute and you can just imagine; Shave a pit or get a cut – forget it!

So when we formulated Stick-It.us 100% Body Stick, we chose the more difficult path, we choose to use pure plant power. Only 100% unadulterated pure plant and essential oils. That is why you can stick it wherever you want. In fact, it may even soothe that freshly shaved arm pit. It might even help protect that little cut. The point is, we were out to make more than just a deodorant stick, ours had to do more or else why bother. 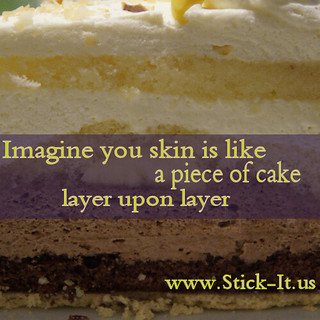 The antiperspirant works by blocking the pores and not allowing the skin to perspire. Imagine your skin is like a piece of layered sponge cake, each with their own function. Now imagine the top layer is a fondant. A fondant is like a solid sheet of “plastic” sugar applied to the outside to lock in the layers. Antiperspirants work like fondant on the skin.

Typically, manufacturers use aluminum salt compounds. The mechanics of it go something like this; you smear it on and as soon as your body sweats, the water reaches the surface and mixes with the compounds to create a goop to plug up the water works. That ‘aint natural. As if to add injury to insult they toss in synthesized scent to act as a deodorant. Two bangs for your buck!  The good news is that it only gums up the works for a limited time. The bad news is, those aluminum compounds are absorbed into the body. The even worse news is that those compounds are now being tied to brain diseases that show up later in life. Would you rather deal with a little sweat. or run the risk of losing your mind over it?

So even if they didn't use aluminum and they found another way to stop up the glands, would you really want to put a plug in nature? We get it, there is a fraction of the population that sweating is a real big issue, they will sweat buckets for no reason. If we had that problem what wouldn't we do to solve it. But for the majority of us, come on! What's a little sweat amongst friends just Stick-It so you don't stink!

If you want to be a part of the “In The Know” crowd, sign up here

Clearly, We are not your Doctor!

So here is our disclaimer for information. The Stick-It.us blog may contain articles on science, or medical topics; however, no warranty is made that any of the articles are accurate. There is absolutely no assurance that any statement contained or cited in an article touching on science or medical matters is true, correct, precise, or up-to-date. The overwhelming majority of such articles are written, in part or in whole, by “nonprofessionals”. Even if a statement made about science or medicine is accurate, it may not apply to you or your symptoms.

The information provided at Stick-It.us is, at best, of a general nature and cannot substitute for the advice of a medical professional (for instance, a qualified doctor/physician, nurse, pharmacist/chemist, and so on). None of the individual contributors, nor anyone else connected to Stick-It.us can take any responsibility for the results or consequences of any attempt to use or adopt any of the information presented on this web site.

Nothing on Stick-It.us's site or included as part of any project or product of Stick-It.us should be construed as an attempt to offer or render a medical opinion or otherwise engage in the practice of medicine.

What Kind of Stuff

Get the inside scoop on news & special deals.

Give us your best email address to get your 15% off coupon delivered to your inbox.

Success! Check your in box for your coupon code

You won't see emails from us more than once or twice a month unless we have a special announcement.